The hierarchy of social media

Although Internet communities can facilitate an exchange of progressive ideas and information by allowing a shared-authority, they can also become sites of marginalization and exclusion. Amazing hashtags like Suey Park’s #NotYourAsianSidekick rely upon a digital community to make an expression of solidarity go viral. Facebook fan pages, such as Amanda Grace Sikarskie’s Quilt Index rely on digital community to help identify artifacts for metadata. While Carolyn Nye Stevens uses the Twitter community to assist her with her research on endangered buildings in Providence. All of these examples illustrate how the power of a digital community can be harnessed in a positive way. But digital communities can also reenact the same racialized ideologies reproduced in real societies. In Danah Boyd’s article, “White Flight in Networked Publics? How Race and Class Shaped American Teen Engagement with MySpace and Facebook,” she shows how digital communities can shift in a way that excludes certain groups from participating in the conversation.

Digital communities expand the possibilities for positive knowledge sharing. Park’s #NotYourAsianSidekick began trending as more and more people identified with its meaning. Twitter users who identify as Asian retweeted their own experiences using this tag as a way to easily find and connect with others, drive the conversation, and highlight issues relevant to their lived experience. In a way, the hashtag became the equivalent of a digital protest march. Instead of marching around in a specific location with messages on signs, #NotYourAsianSidekick trended globally and appeared in millions of timelines. I’m not sure if the research of Sikarskie and Stevens has the same reach as Park’s hashtag, but lots of interested citizens proved to be an invaluable resource for cataloguing and uncovering the history of their specific projects. 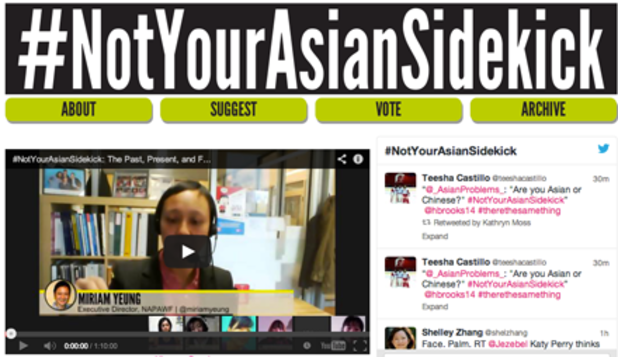 Online community engagement and its collaborative knowledge building and sharing can be amazingly impactful, but Boyd shows another side where Internet platforms lead to exclusion. In Boyd’s article, she discusses how users migrated to Facebook from MySpace in terms of “white flight.” Careful not to belittle the term’s importance for explaining urban decay, Boyd uses it to map out similarities in social media migration. As MySpace became more popular, it was maligned in mainstream media for harboring sexual predators. This lead to panicked parents who steered their kids away from using the site. According to Boyd, the teens that were forced to leave by their parents usually came from more privileged families. When they left so did their friends and MySpace eventually lost its cache as a cool site. As more users left MySpace, the site was maligned, especially in the rhetoric of Facebook users as a wasteland full of predators, spam bots, and abandoned profiles. The way people talked about MySpace echoed the discourse regarding blighted cities.

Benefitting from the mass exodus, Facebook became widely known as a kind of suburbia. It was the site where users could relax with stricter safety features Boyd describes as akin to a gated community. To explain other reasons for switching, she says Facebook adopters tend to praise the site for its cleaner interface, which they say lacks the gaudiness of MySpace’s blinged out glittery profiles and loud music. It is in the choice of language used in talking about the two sites that Boyd finds the most troubling. She writes, “The explanations teens gave for their decisions may not be explicitly about race, ethnicity, or class, but they cannot be untangled from them, just as fear based narratives about the “ghetto” cannot be considered without also accounting for race, ethnicity, and class” (Boyd, 220). The migration to Facebook erased the community that still existed in MySpace.

If there are any meaningful conversations or progressive movements happening on MySpace, they will never gain the cachet of a Twitter hashtag or a Facebook meme. Because the people who still use MySpace no longer benefit from the social prestige of these newer sites. Most users who left MySpace no longer pay attention to that community and, as a result, neither does our media. This is significant, because the media sheds light on trending hashtags and dominant Facebook discourse for everyone on and off these sites who may or may not have noticed. MySpace users are no longer the focus of their attention. Yet, as of 2015, MySpace still reaches 50.6 million unique users every month.

Although ubiquitous, access to social media in itself is a privilege. Park, Sikarskie, and Stevens all deserve to be applauded for their work. Each of their online projects are important and impactful. But not all members of the public own personal computers, laptops, tablets, or smart phones. In addition to issues of access, Boyd reminds us that the cohorts of these social media platforms may be skewed by implicit and explicit racial and class bias among the real users inhabiting them, as well as the mass media who have the power to either publicize or ignore their trends. Thus, along with assessing the success of collaborative communities, we always have to make note of who is not represented in the conversation and why.

Grad student at Rutgers-Newark, lover of comedy, the Upright Citizens Brigade, LGBTQ+ & women's history, feminism, oral history, graphic novels, road trips, and falling asleep to Murder She Wrote. Find me on Twitter: @ykristyn and @QueerNewark
View all posts by ykristyn →
This entry was posted in Archive. Bookmark the permalink.

2 Responses to The hierarchy of social media